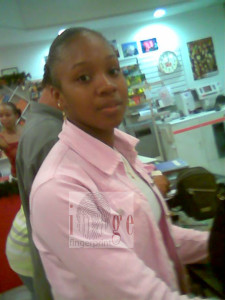 Trinidad and Tobago is a country blessed with many resources, including our gifted citizens. Whether we acknowledge, appreciate and reward them sufficiently is a topic for another article. One such extraordinary national is the late World Boxing Champion, Giselle Salandy (1987-2009).

Ms. Salandy died five (5) years ago, prematurely and quite tragically in an automobile accident on January 4th 2009, she was 21 years old. Thankfully, Ms. Tamar Watson another Trinidad and Tobago sporting icon, who was a passenger in the vehicle, survived the crash. Ms. Salandy, was herald as one of the world’s best boxers. I know little of the intricacies of the Sport of Boxing but I do remember watching Ms. Salandy, at a press conference before a match one year and I thought to myself that she could throw a quick punch. Her opponent had fired a punch and Ms. Salandy quickly moved out of the way and fired back. It happened in a flash.

Starting her boxing career at the tender age of eleven (11) in her home town of Siparia, she worked hard to over come adverse personal circumstances or what we would call “a hard life” and upon her death was the holder of eight (8) International Boxing Titles including Women’s International Boxing Association (WIBA), World Boxing Association (WBA) and World Boxing Council (WBC) titles. She was also awarded one of our country’s highest awards the Chaconia Gold Medal in 2007, for her efforts.

I met Ms. Salandy and her trainer some time before she died and she graciously allowed to have her photo taken. She also gave me her autograph. All I had to write on was a new calender and she did not want to write on the dates so she signed in the corner. The photos were taken with a cell phone hence the quality, none the less I am glad I did not let the opportunity pass to stop and chat with her and take her photo. May she rest in peace. 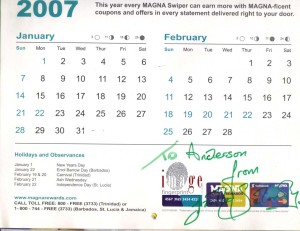