Let me start off by saying, I would prefer to think, it was a genuine deliberate gesture, accidental, or purely coincidental that one of the Emperor Valley Zoo’s newest additions was given the name Mandela. Being mindful that it is always best to choose ones battles, note I said “would prefer”. Alternatively, it would mean that my brain would have to process the possibility or reality that it was not accidental but deliberate and born out of utter disrespect for the world’s recently departed giant of a hero Mr. Nelson Mandela. None the less in the fullness of time all things will be revealed and judged.

The blog focuses on the two (2) six (6) month old male giraffes who were born in captivity and transported from Texas, in the United States of America to Trinidad. The animals are majestic and one can appreciate why they would be more at home to the wide open plains of their native home Africa. They seem to be adjusting well however, not only to their enclosure but also the constant chatter of excited visitors who seem not to see the “quite” sings posted on the walls all around.

Sincerely, imagefingerprint hopes that the animals will do well. We hope to that zoo officials will as they said, purchase a female giraffe which would facilitate the populations increase over time. 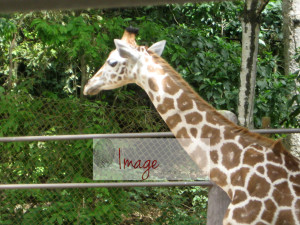